I love Orlando. It’s one of my most favourite places in the World. I’m a huge big kid at heart and there’s nothing more fun than spending a few weeks gallivanting around some of the best theme parks in the globe.

1. The Wizarding World of Harry Potter

This is absolutely top of the tree in terms of my picks. YOU MUST GO HERE. You must sample butter beer, shop for wizarding supplies at Diagon Alley, buy an interactive wand, take the Hogwarts Express to Hogsmeade and tour the castle. I’ve written a full post on the blog previously here, and I cannot recommend enough spending two days really exploring this world which is split across the two Universal parks (connected by the Hogwarts Express which is a thrill in itself). Go. Learn some magic and call people outside of the park muggles. It’s outstanding, Harry Potter fan or not. 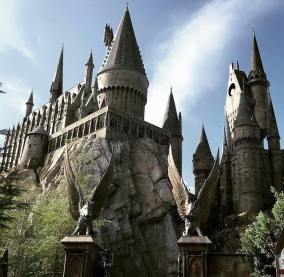 This is an expensive suggestion, but if your budget allows for it, it’s totally worth it. This is a full day experience, set in an entire park of its own, where you can snorkel, relax, feed the birds, dive and SWIM WITH DOLPHINS. You get quite a lengthy slot with the dolphins, in small groups, and it’s the most amazing experience to get up close and personal with these beautiful animals. All food, snacks and drinks (including alcohol) are included in the day and you can also get entry to Seaworld, Busch Gardens and Aquatica with the ticket. We added Seaventure to our day which involved a 30 minute diving experience with dive helmets which I would also thoroughly recommend. 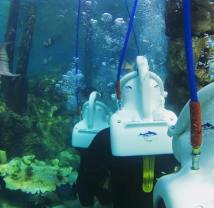 This is a must see night time show, set in an open air amphitheatre within the park. The show incorporates water, lights and fireworks to produce the most outstanding effects. You’ll see all of your favourite Disney characters throughout the show and you’ll be thrilled to witness Mickey Mouse slay the dragon with the sword in the stone. If you aren’t mesmerised, I’ll eat my hat.

4. Dine with the Beast at Magic Kingdom

Beauty and the Beast is one of my favourite films of all time so when Beast’s castle opened with a restaurant incorporated in the form of Be Our Guest, I was desperate to visit. It’s ridiculously hard to get a reservation, but its worth really trying. I signed up to a service which notified me when a table became available on my selected dates and we got very lucky. Aesthetically, the castle is so true to the film, complete with an enchanted window displaying a snow-blizzard outside and an eerie West Wing showcasing the enchanted rose. The French themed fare is very tasty and an absolute must try is the “grey stuff” for desert – it really is delicious. You also get to meet the Beast at the end of the meal which is just magical and the souvenir photo has become one of my most treasured photos of the trip. 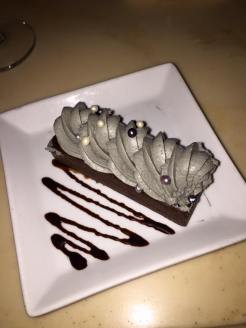 5. Swim in the snow at Disney’s Blizzard Beach

Orlando has a great selection of water parks which is perfect for those hot days when trekking round a park is just too much effort. My favourite of the bunch is the snow-themed Blizzard Beach at Disney World. All slides are built to resemble snow capped mountains, there are little chalets dotted around the park and even ski-style chair lifts to take you to the top of some rides. Grab a ring and float around the lazy river for some R&R or summon your inner dare devil and plummet down the 120 foot of Summit Plummet at eye-watering speeds.

6. Shop til you drop

Take a day out from the parks and enjoy a bit of retail therapy. Orlando has some of the best designer outlets (one at each end of International Drive) and their malls are gigantic (I particularly enjoyed myself (too much) in two of the huge Sephoras). If souvenirs are what you are after, take a trip to Disney Springs and enjoy the huge Disney store which houses every Disney themed item you could wish for. I treated myself to a Disney Pandora charm for my bracelet in the jewellery section – a lovely keepsake which cannot be picked up in the UK.

7. Get your adrenaline pumping at Busch Gardens

Although all the Orlando parks have big thrill rides, there are no other parks quite like Busch Gardens down in Tampa. If you’ve hired a car, I highly recommend driving the 90 mins or so. Busch Gardens has several high-speed rollercoasters alongside a park Zoo where you can get up close and personal with tigers etc. Take a ride on the relatively new Cheetah Hunt which simulates a Cheetah running through the plains, starting with a white knuckle launch of 60mph. If that doesn’t get the adrenaline pumping – give Falcon’s Fury a whirl where you’ll be hauled up a 315 foot tower only to plummet at a 90 degree angle to the ground. Easy right?

8. Wonder the globe at Epcot

For me Epcot is the weakest Disney park. Not because I don’t like it, but because the others are just SO good. However, I always recommend for people to take a trip to the World Showcase at Epcot. Here, you can easily wonder through 11 different countries, from France to Japan. You can also pick up various speciality items in each country. If you happen to visit in October, they have an annual food and wine festival which incorporates lots and lots of little food stalls dotted around the various countries and we found this was a great alternative meal on one of our evenings.

The Kilimanjaro safari ride at Animal Kingdom is deceptively good and this is coming from somebody who has been on a real life African safari! If you ride early in the day, you’ll spot plenty of wildlife set in a pretty large reserve on site at the Animal Kingdom Park. If time permits, and you really love your animals, I would recommend riding a second time slightly later in the morning and sitting on the opposite side of the vehicle that you sat in the first time. Different perspectives see different animals.
Once that’s ticked off your list, head over to the Himalayas and climb Everest in a peaceful train ride no less. But beware, something will go wrong and you will encounter the abominable snowman which may or may not result in your peaceful train ride hitting speeds of 50mph, backwards and forwards. Not for the faint hearted. 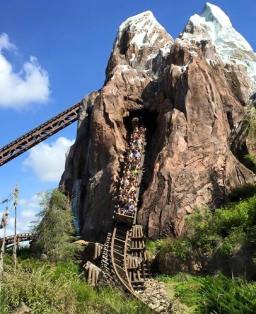 10. Mingle with the stars

My final must-do is to socialise with the true stars of Orlando – the various characters. Almost every single park offers meet and greet opportunities with various fan favourites and over the years, I have made a point of going queuing to meet and interact with them. You can also buy an autograph book (if that’s your thing) and see how many names you can collect. Evert character commits to staying 100% in character at all times within the park. So much so in fact that during one Halloween event, whilst I was dressed up as Tinkerbell in the Magic Kingdom, Captain Hook marched up to me, mid meet and greet no less, to wave his great hook in the air and really tell me off! He spotted me again during the parade and shook his fist at me. Highly amusing, if not a little embarrassing. 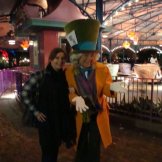 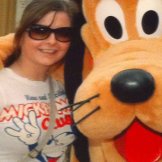 So there you have it – my must do Orlando experiences/attractions!

Have you ever been to Orlando? If so, what is your favourite attraction?

Let me know if you would like to read more in depth posts on any of the above!